The Lorelei formed in early 1990 when Martin (vocals and acoustic guitar) and Fraz (drums) recruited Jonny on bass after meeting at Venture Scouts. With no previous band experience things were initially a little shambolic but there were definite signs of the great songs waiting to be unleashed. The arrival of Beefy after a couple of months helped pull things together and the first foundations of The Lorelei were laid. Over the coming months Diane and Flossie joined the party and The Lorelei’s unique folk, punk, rock, metal sound began to develop through a hugely varied range of influences. Then, following a succession of drummers, the final piece of The Lorelei jigsaw was put in place when Keith was recommended. Keith’s arrival completed the line-up which, apart from John, remained until 2015 and Jonny’s departure.

Following 18 months of gigging throughout Scotland, to an ever increasing and loyal following known as The Clangers, The Lorelei were selected by M8 magazine to feature on a free tape of Scottish unsigned talent and were promptly offered a 2 album deal with Lochshore records. The Lorelei went on to release their first 2 albums Headstrong and Progression.

7 years was spent touring from Lerwick to London, playing up to 200 shows a year. Gigs ranged from small rural bars, to renowned venues such as King Tuts Wah Wah Hut, to independent festivals, right through to a rapturous reception at the Glasgow Royal Concert Hall as part of Celtic Connections in 1995. Managed originally by Rob Swan and then by Tam Balloch, they became regular features in venues throughout Scotland, England, Ireland and Wales and the fan base continued to grow. Touring was constant and The Lorelei way of life was based around travelling, playing, drinking and laughing – their reputation for having a good time preceded them. This was part of the whole charm of The Lorelei, and something that remains with them to the present day.

The constant touring and living in a yellow transit van together eventually took its toll and The Lorelei sadly split in 1997 following their farewell gig at Aberdeen’s Music Hall! 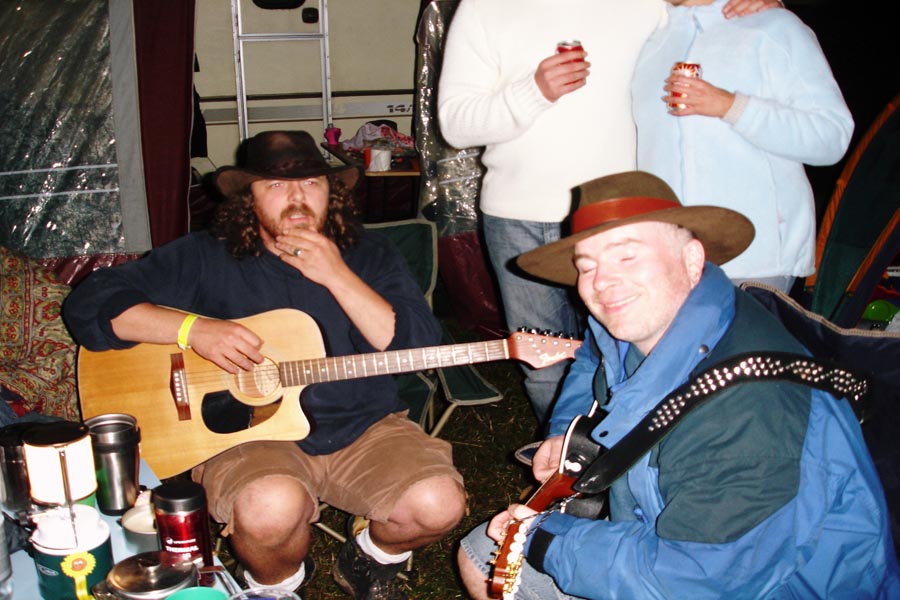 In summer 2005 Jonny, Beefy, Flossie and Keith all got together at The Tartan Heart Festival, sat down, played together and talked about days gone by and how much they missed playing together. That afternoon, Beefy and Flossie bumped into promoter Rob Ellen who immediately asked “Are the whole band here? We could get you on for a slot!” At this point a seed was sown about getting The Lorelei back together. A further meeting between Beefy and Jonny, over a curry in London’s Brick Lane, further fueled the desire to reform and, following a string of emails between Diane, Flossie, Keith, Beefy and Jonny, it was evident everyone felt the same. John (a close friend to The Lorelei from his days in The Dawntreaders) was asked if he would do the honours on vocals.

The Lorelei, with John now in place, finally met on the 9th of January 2006 to see if the old magic was still there. It was immediately clear  that it was going to work and they decided that afternoon that, rather than becoming a nostalgia act, just churning out old favourites, The Lorelei would concentrate on writing new material and move on to a new chapter.

In July of 2006 The Lorelei relaunched with a sell out show at Aberdeen’s Lemon Tree. No one was more surprised than the band themselves at the interest they generated in the 12 months since the seeds were sewn.

In the immediate wake of their return The Lorelei recorded a live DVD, were invited to record a brand new track for the Fat Hippy Sampler Vol 2, had a new track “Home” used in a Barnardos DVD, had airplay on Northsound, Xfm, BBC Radio 2, BBC 6 music, Radio Scotland and Moray Firth Radio and rounded off 2006 with a special Christmas show to another capacity crowd at The Lemon Tree.

The Lorelei were also invited to submit a track for the cover CD of the September 2006 issue of Rock’n’Reel magazine – very exciting as The Lorelei are the only unsigned band to be included in Rock’n’Reel’s cover CD series. The following couple of years saw The Lorelei re-establish themselves in the Scottish music scene with regular festival appearances (including opening the Tartan Heart festival), gigs throughout the country  and prestigious support slots including a billing with Miles Hunt & Erica Nockalls of  The Wonder Stuff.

This was all tied together with The Lorelei releasing an EP of new recordings in August 07. The Home EP featured 6 brand new tracks which unveiled the song writing talents of Beefy and Keith. With these highly charged and emotional tunes the band retained their high octane approach to the folksy rootsy rock which had helped built their reputation throughout the 90s.

2011 saw The Lorelei release their highly acclaimed 3rd album Faces on Fat Hippy Records. Diane brought her writing talents to the fore with this release, and Flossie’s array of instrumental talents truly surpassed themselves! With Faces came a UK tour (including a long awaited return to London) and featuring as album of the month on folkradio.co.uk

After 3 years plugging Faces throughout the country, more festival appearances and more supports (with the likes of The Levellers), The Lorelei and Fat Hippy decided it was time for a 4th album, and in June 2015 Roaring arrived on the shelves. Welcomed with rave reviews and more gigs throughout the land The Lorelei’s latest offering showed no signs of them being anywhere near slowing down.

The final appearance of Jonny in September 2015, before he headed off to start a new life overseas, saw a personnel change on bass – with Fat Hippy’s Captain Tom jumping on-board.

As of April 2019, Tom has left The Lorelei.  However, the band continue to move forward with some new material and exciting gigs in the pipeline.  Watch this space!