A Farewell From Jonny

So after 25 years, or 17 depending if you want to count the break we had, I have moved on and a new chapter for The Lorelei begins. Being presented with an opportunity to relocate overseas was just too great to turn down but it was so incredibly hard to leave The Lorelei behind.

When we split up in 1997 that was it, we had had a great time and given it what we could, but the time was right to end the adventure. I never had any interest in playing following the original split of The Lorelei. To me, nothing could have matched what we had together and I couldn’t imagine standing in a practice room or getting up on stage with anyone else. Then when I met up with Flossie, Beefy and Keith at Belladrum in 2005, the first time I had been together with them all at once, it was like we had never been apart. Shortly after, at a curry house in Brick Lane with Beefy, the idea of getting together for a gig was properly born.

In January 2006 myself, Diane, Beefy, Keith and Flossie got together with our old pal John and battered out some older tunes. To our amazement it felt to us like we could still do it and John slotted in like he was always meant to be there. The overwhelming joy of that day continued for me until 15th September 2015.

In many ways I have enjoyed our 2nd incarnation even more than the 1st. I feel we were a more coherent and focused unit (maybe a little sloppier at times) with a clearer vision, a little more collective wisdom and an enjoyment factor x10. I also feel this time round that you guys have been more of a part of the live Lorelei experience and we have massively fed off each other.

Now after another 9 years, 1 EP, a 7″ vinyl single, 2 albums, countless great gigs and festivals and some brilliant laughs it has come to an end for me again. The first end felt like the right time and was in some ways a relief. This time  was so much harder as there was still along way to go with this journey. What I am really pleased about is that this time there will still be The Lorelei and their journey will continue to new and exciting things. Yes I am gutted not to be a part of that but I am so pleased that there is more to come.

So I want to thank all of you for sticking by us through both incarnations and continuing to believe in what we do. Nothing would be possible without your continued support! I want to thank Rob and Tam for getting us off our arses in the 90s and pushing us to do around 150 gigs a year all over the country. I want to thank Tom, Paul, and Q, and everyone else involved at Fat Hippy over the years, for your belief and support.

Caroline, thank you for supporting my crazy dream and suffering me vanishing for weekends at a time. You have helped me realise what a special thing I have with The Lorelei during periods of doubting, when the time and travel and commute from London to Aberdeen, or the time away from home, got to much. You have shown amazing levels of patience and support as I abandon you to play songs and sit in fields with my pals!

And to my 5 best pals, to John, Beefy, Flossie, Keith and Diane. Thank you for being you and being the most amazing people I can call my friends. I still can’t imagine playing with anyone else and very much doubt I ever will. You are irreplaceable as musicians, stage companions and as friends. I can’t wait to see what you guys do next but will always be sad not to be a part of whatever that may be!

We finished my final gig with my top 10 Lorelei tunes. I’m not much of a speaker but I tried to introduce these on the night and let you know what they meant to me. I guess a combination of emotions and not been much of a talker conspired to make me a babbling wreck so I thought I would just jot down what I actually wanted to say!

It was so hard to pick a top 10 and I nearly instantly regretted wanting to do so. I felt almost unfaithful to the ones I didn’t choose. There are so many great tunes from our 4 albums and 1 EP and for a while my top 10 consisted of 15 songs! But in the end these 10 actually picked themselves quite easily for the following reasons.

Sweet Lorelei – This is the last song I recorded with The Lorelei and the last one I was involved in arranging. With 2 hours left in the studio before my flight home, and 9 tunes recorded for Roaring, we were looking for what could be the 10th. Beefy had a couple of chords and we mucked about with them and came up with something that sounded like a tune. A part of John thought we should wait and structure it properly, but with an hour left and nothing to lose we thought we would just give it a bash and see what happened! We got the drums and bass down in a couple of takes and I shot off back to London. Over the coming weeks all the other parts materialised and we ended up with this ethereal, poppy, sea shanty of a song that just makes me (and hopefully you) smile from ear to ear. The first time the 6 of us ever played it together was at the sound check for my last gig and somehow it just worked. I love it and am so glad I got to play it live!

Home – When we reformed in 2006 we had a huge back catalogue but weren’t entirely sure if anything we could write now would match up. Well, to me this proved that it easily would, and that we could even surpass what had come before. The Beefy penned Home really did feel like a homecoming. It was the first song of our return and the first recording we did with Fat Hippy. A real milestone for us.

Wendy Frenzy – This is our oldest surviving song (I think it may even pre-date Beefy) and the first one I remember hearing that made me think “wait a minute, we could be on to something good here”. I have a vivid memory of going to pick up Martin to go to the Mudd Club and trying to hurry him along as my dad was sat waiting in the car outside. He insisted on playing me a new tune he had written and as soon as he started playing Wendy Frenzy all thoughts of my poor, patiently waiting dad were forgotten. I don’t recall a gig where we have not played this and we got signed off the back of it. A very, very significant tune for us.

Bastard Child – Holding our first piece of vinyl was a very exciting moment….and it only took 24 years for it to happen when we released Bastard Child. As John often points out it wasn’t the best choice of single as it is in a format no-one can play with a title that can’t be said on the radio but I love it all the same. I just love the pace of it and how the beat just keeps pushing it forward. Even after countless listens it seems to hold an element of wonder to me, like I am excitedly listening to it of the first time not knowing what is to come. It was short listed for Faces but wasn’t quite ready. I’m glad we were patient with it and made it what it is.

Drawing Inn – When we first recorded this for Home I thought it was just an absolutely lovely tune. Over the years it has grown to be one of my favourite moments of any gig. You guys in the crowd are truly part of the band for this song when you take over on vocals. The first couple of times it really happened were at Speyfest and at The Garage in Islington when the crowd participation gave me goosebumps. It has just grown and grown from there.

Perfect World – What can I say, the quintessential drinking song! Get on your dancing shoes and spin each other around until we decide the time is right for it to end. There’s nothing more needs said, just go and listen to it and have a dance!

Love is Blind – On 5th August 2011, the best day of my life, on the way to Belladrum, Caroline and I stopped off at Gretna and secretly got married. Belladrum that year became our wedding reception in some ways and we were also lucky enough to be playing. John dedicated Love is Blind to us during the set (not quite sure what you were getting at coming to think of it) and this song, as well as being ace, reminds me of that amazing day, the wonderful weekend and the happy times that have followed.

Hack Yourself – A fantastic day was had in October 2011 making the video for this song. A great number that I would bet anyone they couldn’t get all the way through without at least tapping their feet. John will explain at gigs how this idea came from Bruce Lee’s idea of hacking away the unessential parts of your being, decluttering your life (something that is probably more relevant today than ever before). But regardless of what else he says this song WAS NOT written by Jackie Chan! 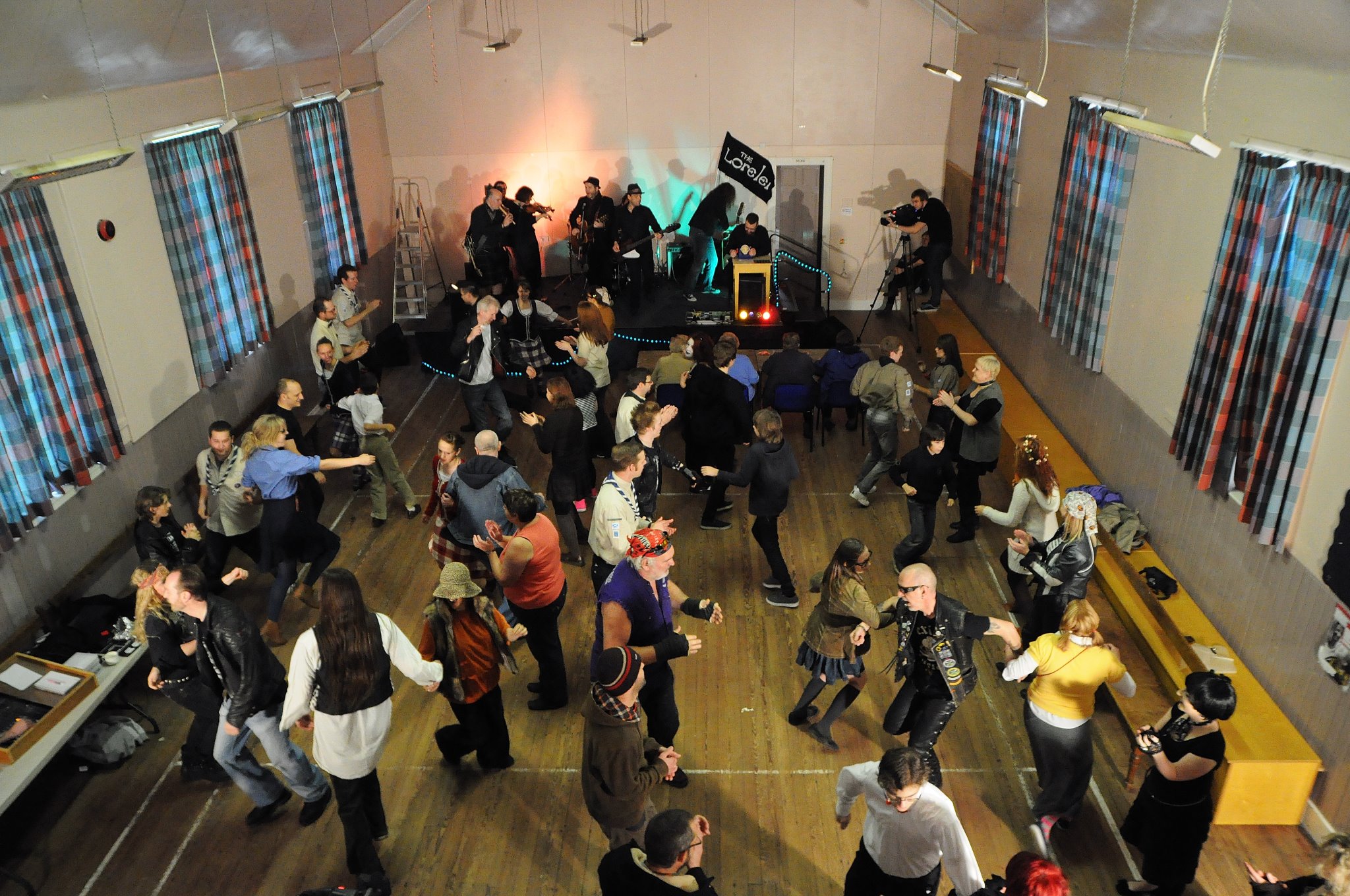 Walk Like a Child – A beautiful, beautiful song that has all the makings of a stadium rock epic (well it does to me!)! This song is particuarly special as it is the only one that started out life in the 90s but wasn’t completed until about 2010. We had a song called Free back in about 1995 that consisted of a great guitar part that Beefy had come up with but not a whole lot more. We played it live a few times but never with any structure and we never really got round to realising its potential until about 12 years later. I’m glad it stuck around cos what a tune it turned in to!

World Hotel – A song written by a drummer…..”yeah right” was my initial reaction. But bloody hell Keith you haven’t half come out with a few crackers since we got back together! Another great drinking song that you can all get involved with. Such a happy song of togetherness and a great one to play live, although I always want it to go faster!

So there you go. What I wanted to say about these tracks at our last gig but couldn’t quite get the words out!

That night has since taken on greater significance as it turned out to be the last time we saw our dear friend, fan and all round magnificent human being, Neil Wilson. Never has there been a more genuine, caring and selfless man and this night is dedicated to you. You are hugely missed dear Neil.

Retrospectively, the only one I might have changed in there would be Bastard Child for either The Singer Sings or Tie Dyed. Much as I love Bastard Child I did find it could be a little hit or miss live and the other two always gave me oodles of playing pleasure!

Thanks again for all the amazing times. Keep the support going for another 25 years and beyond. Hopefully I can join you in the crowd for a dance some time soon.